Innovation is dying, improvement is leading 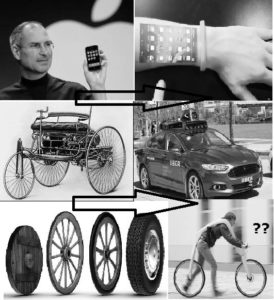 The last century was all about innovation. Invention after invention saw the light and brought us to the world we live in today. And as I see it now, there is still a little room for invention, but what we’re mostly doing is improving. We invented the automobile and improvements on that make it that we ‘order’ a car, tell the destination and we’re brought there without actually driving the car, as it will drive us (look at UBER).

We invented printing, and more specific 3d printing. This changes the game for high volume manufacturers as we’re now able to print the stuff we need in our own homes (not ready yet, but within a few years…) and not need to order from a factory that makes them by the millions.

We’ve invented the smartphone and frankly it hasn’t really changed a lot since the last decade. Just improvements and the new way of communication that’s build upon the smartphone is already there, it just needs improvement.

Actually I guess if one invention is nearing its’ end of life another one is badly needed: As more and more countries are producing with less and less of their population, economics and thus the “invention” of money will become under more and more pressure. A research showed that only 40% of the Dutch working force really is responsible for the full gross national product. That means that 60% is produced otherwise (automated). So the Internet of Things is already growing rapidly and the actual producing workforce will decrease rapidly. We need bright minds and bold decision makers to change this route to implosion on a global scale and change our cultural, money dependent habits.

I could go on pages on this, but my real goal is talking about the software industry and how they’re already out of innovation for quite some time now. It’s all about improvement and that would actually not be as valuable as the new invention. Although the software industry was capable of getting its revenue from improvement as no other industry ever was capable of. And when the revenues started to decrease they “invented” the software audit to recover their losses. Not to think about the fact that they were able to get you paying for the research and development and paying for the new release (as this release was not the version with capabilities you started out with….). So my call is to the software creators and software publishers: Think as you did in the beginning of computing when you started developing software code and the improvements were more important than the license. Now be as inventive on the licensing models and actually hear your clients wishes instead of telling them what their requirements are…. Be the one with that one idea on licensing that revolutionizes the industry. I can imagine that the audits aren’t as profitable as they seem. As client relations are getting under pressure and some customers switch to the competition, there’s also the cost part of these audits when hiring auditors isn’t the cheapest thing to do. Certainly now clients are getting more and more ready for the audit battle and lead times are getting longer.

Currently we see these next steps (the after audit era is molding bit by bit) as software as a service or pay for use or whatever name you can give it. In this model you can connect to the software, make it to your use and even pay for the space your using for your data you’re (re)creating. The ‘hardware’ and maintenance & support is now incorporated in your use price and will rise with the annual price adjustments (rarely lower than before). So you’re now in a full vendor lock-in and you just have to trust on the bills to be correct measured and calculated (No need to worry, the software industry never showed any greediness before, but as always better safe than sorry)

So I think it’s time that the software users or customers start innovating or improving their attitude. If a software publisher sells you a pay for use of a specific environment, you don’t pay a monthly fee in a contract for one or more years (that’s not changing Capex for Opex). In a new mutually agreed contract, you agree on the method of measurement and the way that can be checked from both sides or you install your measurement tool yourself as the customer, to be able to check your publishers’ bills.

So the real innovation on software must be how the customer accepts the software in its’ environment or how he/she may use it and on what terms, conserving IP and copyrights of the publisher and make that as easy and understandable as possible. The software publisher that brings a model to the market that fully supports that, would be the most innovative one!

And that would be an innovation with a big improvement for the end user as well as the software publisher!

All my colleagues in the IT&SAM market know that we’ve been building for the – distant – future for many years now and we’re getting far ahead in developing the solutions of our current and future clients. And that’s okay as long as we still are able to understand and take care of the need of the client that just found out he or she needs to do something on the current situation in his or her organization. Our knowledge might take them on a journey that seems like “one step for man, but a giant leap for mankind”.

At In2SAM we look at IT&SAM with a different view. If you’re interested in a best in class or a innovatory solution just contact me or my colleagues. You’re unique, why should your business be approached standard? Every standard is a base for innovation or improvement. We understand the history and that enables us to to show you the future.